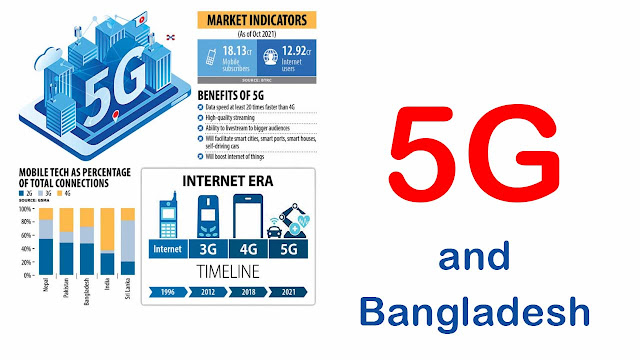 Bangladesh joins more than 60 other countries as it rolls out the fifth�generation (5G) of mobile internet connectivity today.State-run mobile phone operator Teletalk will be the first to launch the super-speed technology, while the private operators are expected to jump on the bandwagon next year after the auction for spectrum in March. Teletalk will introduce the updated service on an experimental basis in six areas: the Prime Minister’s Office, Parliament, Secretariat, Bangabandhu Museum on Dhanmondi 32, Bangabandhu Sheikh Mujibur Rahman’s birth place Tungipara in Gopalganj, and the National Martyrs’ Memorial in Savar, said its Managing Director Md Shahab Uddin yesterday. So, most of Teletalk’s 65 lakh mobile phone subscribers will have to wait for more days as the operator is yet to get the clearance for its Tk 235 crore project to set up equipment at 200 points. Subscribers of the private mobile phone operators will have to wait until the spectrum auction. The 5G technology promises to provide data speeds at least 20 times faster than 4G and underpins the great advances of the next era, from self�driving cars and augmented reality to smart cities and artificial intelligence, according to Reuters. The technology is expected to bring higher-quality streaming and the ability to livestream to bigger audiences. 5G is the highway for automation, The trial run of 5G will be inaugurated at a programme at the Radisson hotel in Dhaka, according to an invitation of the telecommunication division. But the launch comes at a time when Bangladesh is yet to benefit from its 3G and 4G technology deployments. Join Our FB Group Reshep’s Career Care The reach of mobile networks has expanded with 95 per cent of the population covered by 4G mobile broadband networks. Still, only 28 per cent of the mobile phones are connected to 4G, while 25 per cent use 3G and the rest 47 per cent 2G, said the GSM Association, an industry organisation that represents the interests of mobile network operators worldwide, in a report in March. Bangladesh has 12.92 crore internet subscribers as of October. Of them, 11.91 crore access internet through mobile phones and the rest through internet service providers. The first 5G network was launched in April 2019 by South Korea and the US. Commercial 5G is now available in 1,336 cities across 61 countries, said Arizona-based VIAVI, which offers lab-based network test solutions, in June in its “The State of 5G” report. Through this, the taxpayers’ money is being wasted. In the backdrop of poor 4G service, talking about 5G is nothing but a stunt. Therefore, the government must overhaul the anti-broadband policy regarding optical fiber infrastructure. Infrastructure sharing should be mandatory.

Share
Previous What Is a Balance Sheet ?
Next Business letter by announcing new product