E-Walet and Its prospect in BD

Focus writing: E-Walet and Its prospect in BD

COVID-19 continues to affect people’s lives in various ways. People are staying indoors because of restrictions on movement and from a fear of being infected. While this is the right thing to do, one still needs to purchase household essentials and send money to relatives who need it. Essential service industries also need constant cash flows and payments. A fish seller from Sonargaon, Narayanganj in Bangladesh, Jamal offers one such service. He travels 30 km every day to Dhaka from his village to sell fish. He would receive bulk payments from customers-once in 15-20 days-both in cash and in his bKash wallet. However, that was the story from before COVID-19. 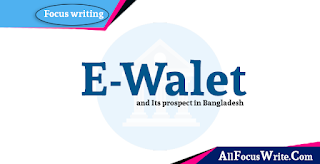 PROACTIVE STEPS TAKEN BY BANGLADESH BANK: Bangladesh Bank asked the the Home and Finance Ministries and Bangladesh Police to facilitate mobile financial services (MFS) as emergency services amid the ongoing closure following the coronavirus outbreak. The Bangladesh Bank has also made MFS cheaper through its directive, which says that no transaction charge would be levied to purchase medicines and other essential commodities using MFS P2P transfer and through debit or credit cards. Further, the directive mandates no charges for MFS cash-out of BDT 1,000 daily at a time. The current charges are BDT 20 for each withdrawal amounting to BDT 1,000. The monthly ceiling of MFS P2P transactions has been raised from BDT 75,000 to BDT 200,000.
In addition, the Payment Systems Department of Bangladesh Bank has directed readymade garment factories to pay salaries to workers and employees through MFS accounts. In response, bKash, Rocket, and Nagad have already registered 1.92 million RMG workers. The market share of RMG workers is 970,000 for bKash, 550,000 for Rocket, and 400,000 for Nagad out of total 1,920,000. We understand that bKash continued to register more than 50,000 new wallets of RMG workers every day. Almost 70 per cent of these wallets are registered at its digital registration agent points.
TRANSACTIONS CONTINUE TO REDUCE:  bKash has been managing, on an average, BDT 4,500 million (USD 53 million) per day since the government declared general leave from March 27, 2020. In the pre-COVID-19 situation, bKash handled approximately BDT 10,000 million (USD 119 million) per day in terms of transaction value.
A significant number of MFS agents remain closed under the current closure, while the remaining agents open their shops for limited hours in a day. The regular earnings of people from the low-income group, such as rickshawpullers and daily labourers have reduced significantly and are even nonexistent in many cases. People from the low-income group have been living on limited aid from the government, social organisations, and NGOs. Such lower-income people use cash-in/cash-out and P2P almost every day and in the present situation, such transactions have reduced. An ongoing MSC study has found that the incomes of some MFS agents have reduced by 50 to 70 per cent. “I hardly open my shop to run the agency business during this lockdown. My income from MFS transactions declined by more than 80 per cent due to this pandemic. If it continues like this, I will have to look for aid from various sources in my community”, said a rural MFS agent from Louhajong, Munshiganj
Activity at ATMs has reduced as well. For leading private sector banks, daily transactions at ATMs and at agent banking outlets have reduced by 30 to 35 per cent and 70 per cent respectively. These extraordinary reductions in transactions can be attributed to the restricted movement of people, the slump in economic activities, and the closure of service points.
The aforementioned fish seller Jamal has been affected as well. While he is not selling fish currently, he has payments due from his customers, which could help him wade through these difficult times. However, some of his customers only have a Rocket wallet and cannot send money to him on his bKash wallet.
Money is indeed not moving smoothly between rural and urban areas since banks and agent banking outlets have limited operations. MSMEs that operate through banks have been facing challenges in sending and receiving money, as banks have not been working in full capacity.
CAN THE INTEROPERABILITY OF WALLETS HELP?: In our opinion, interoperability between MFS wallets will be very useful for Bangladeshis now and in the future too, if the country develops interoperable systems. Under interoperability between MFS wallets, customers who have, say a Rocket wallet will be able to send money to a bKash wallet, and the other way around. Developing interoperability between wallets is complex. It should ensure that the customer user experience is seamless and pricing is just. The backend system of such functionality needs to be considered carefully as well, such as the settlement process for providers and pricing among the parties, among other factors. The regulator needs to establish a governance framework that is transparent and inclusive and ensures strong Anti-Money Laundering (AML) compliance for interoperability.
Interoperability between MFS wallets will have an impact on more than 81 million registered wallets across 64 districts in Bangladesh-and positively, we believe. We wonder if Bangladesh Bank would like to launch interoperability between MFS wallets.
Yet this type of interoperability may have unintended impacts on how agents operate. We expect that many customers will use agent outlets to conduct such interoperable transactions. Yet agents could influence customers to switch providers or deny transactions or charge unauthorised fees. However, we believe that the Bangladesh Bank will tighten regulations as needed to ensure thriving competition in the market.
The most profound impact will be on people’s financial lives. It will remove the current barriers to transactions when the receiver or sender subscribes to different MFS providers. Interoperability between MFS wallets will encourage the use of MFS and provide people alternatives to using cash that is potentially contaminated with the virus. It will help all MFS users, including the newly on-boarded RMG workers. Interoperability between MFS wallets will ease making and receiving payments for goods and services, especially for MSMEs, who are now more likely to adopt payments via MFS wallets as the Bangladesh Bank has already increased the monthly limit for P2P to BDT 200,000. Interoperability has the potential to accelerate the move towards a digital Bangladesh.