Write about Cyber Crimes in Bangladesh 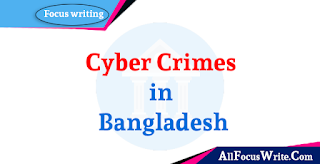 Cybercrimes have skyrocketed in Bangladesh recently posing a new spectrum of security challenges for state authorities. Cybercriminals are hacking different e-accounts to steal money while many others are blackmailing people in various ways. Experts said such organized crime is steadily corroding the society like a virus as online fraud and felonies have bloomed right under the noses of the security forces. It is also gradually eating into the vitals of many promising youths in many ways, splitting family ties and increasing cheating incidents as well, experts opined. Financial organizations, young learners, teenagers, and even the country’s senior citizens are increasingly falling prey to the growing menace. Opening fake accounts on social media sites including Facebook and Instagram, fraudsters post indecent photos on other’s profiles as well as steal their personal data, pictures, etc. Additional Deputy Commissioner (ADC) Md Nazmul Islam of DMP’s Cyber Security and Crime Division told Dhaka Tribune: “We are getting a huge number of allegations of cyber-related crime and most of the victims are women.” “We are working our level best to prevent the crimes, but we do not have adequate skilled manpower to face such growing challenges,” he added. The government in 2006 enacted an ICT Act stipulating “a maximum punishment of 14 years’ imprisonment or a maximum fine of Tk 1 crore or both” for cybercrime.
It also enacted the Digital Security Act last year to combat such crimes. Cybercrimes are taking place every day in the country. A total of 2,044 cases were filed with different police stations and the lone cyber tribunal in the last six years, according to the Cyber Tribunal (Bangladesh) in Dhaka. Data shows the tribunal received 925 cases in 2018 while 130 cases in the last two months of the current year (January-February). The number of cybercrime-related cases has increased many folds in the last six years as the number of cases increased to 925 in 2018 from only three in 2013. Although cybercrime cases were only three in 2013, it increased to 33 in 2014, 152 in 2015, 233 in 2016, and 568 in 2017. To combat such techno crimes, the Cyber Security and Crime Division of the Dhaka Metropolitan Police (DMP), the Criminal Investigation Department (CID) and the Police Bureau of Investigation (PIB) have been operating separate cybercrime units. A 2018 study by the Cyber Security and Crime Division of DMP found that 70% of cybercrime victims were women and 57% of them were between 18 and 25 and 13% victims were below 18 years. The DMP’s cybersecurity unit found it after analyzing 666 cases and complaints filed over cyber-related crimes since 2016. Besides, a report of Cyber Crime Awareness Foundation (CCAF), a non-profit organization, also found that females are more vulnerable to cybercrimes than males in the country. The non-government organization disclosed the report last year after conducting the survey on 133 cybercrime victims. Among them, 51.13% are female and 48.87% male. The report also said around 73.71% of the victims–both males and females–are aged between 18 and 30 years, 10.52% are below 18 while 12.77% between 30-45 years and 3% above 45 years of age. It also said 14.29% of the female surveyed became the victim of propaganda through fake accounts while the percentage of males is 12.78. Despite being victimized, some 30% of the sufferers did not know how to take legal steps while 25% did not feel it necessary to go to the law enforcers and 23% of them keep the matter secret in fear of harassment, according to the survey. When asked, CCAF Convener Kazi Mustafizur Rahman said cybercrime might go beyond control due to lack of clear knowledge about remedy, fear of reprisal and embarrassment to reveal the truth. He suggested conducting awareness programmes, increasing the number of skilled workforce to law enforcement agencies, giving priority to ensuring cybersecurity at the personal level and accelerating private and public initiatives. Mustafizur also urged to address the issue immediately without hampering the growth of digital and internet media in Bangladesh. On February 4, 2016, the country’s banking industry suffered a sudden shock when $101 million was stolen from Bangladesh Bank’s account with the New York Federal Reserve. After the incident, questions were raised about the preparedness of the central bank as well as other banks to prevent cyber-attacks. 52% banks are vulnerable against cyberattack A number of researches were conducted by the Bangladesh Institute of Bank Management (BIBM) on the cybersecurity of the banks. One of its studies revealed that 52% of the banks are at a high risk of cyberattacks. Another BIBM research found that 80% of banks in the country do not have skilled staff and those working are not efficient enough to face such attacks, or even they lack a highly encrypted firewall in their data centres. Only 4% of banks have employees with excellent knowledge about IT and cybersecurity systems, according to another BIBM study. The report also revealed that half of the bank’s officials are unaware of cybersecurity as 28% of the officials in the banking industry are very ignorant about cybersecurity and 22% are ignorant about IT security, while 20% of officials have meagre knowledge about it.

Share
Previous The role of agriculture and rural economy in Covid 19
Next Focus Writing about Green Banking: A Progressive Model For Bangladesh Economy