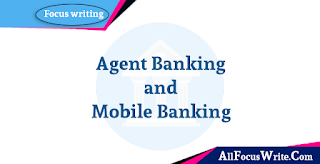 Mobile banking has made public life easier but at the same time it has led to extreme harassment. In addition, through mobile banking, various unscrupulous groups conduct financial fraud and illegal transactions. The online edition of Bangla Tribune’s ‘March 02, 2019 Eng’ mentions that mobile banking in money transactions of 15 types of criminal activities. The use of mobile banking in money transactions has been identified for 15 types of criminal activities. According to the data, drug trafficking, human trafficking, smuggling, extortion, murder, kidnapping, hundi, fraud, jinn king, hello party, fraud, ransom, leaking of question papers, extortion of hostages and other religious activities based on money laundering. Mobile banking is being used. In addition, most of these illegal activities are being conducted through the misuse of technology.

Agent Banking has been working with considerable reputation in customer service since its inception. Agent banking is successfully advancing in terms of foreign exchange, domestic money transfer, savings, social services, etc. In addition, Agent Banking has been working with a good reputation on a wide range of issues, including reducing violence in the hundi business, and financing terrorist activities.