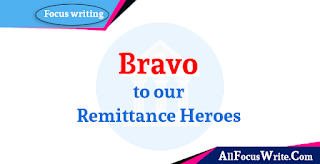 It is heartening to know that despite the gloomy predictions of remittances going down as a fallout of the Covid-19 crisis, quite the opposite has happened in the last few months. According to a report in this daily, remittances have been pouring in consistently for the last four months with USD 2.15 billion coming in last month, providing relief to the economy in the middle of a pandemic. All this is good news for Bangladesh but as experts have pointed out, we must not be complacent and must make sure that the upward trend in remittance inflows is maintained. We must also explore the reasons for the inflow at a time when thousands of migrant workers have been laid off and forced to come back home because of the pandemic.
Experts have attributed several factors to this unexpected remittance inflow. These include: migrant workers bringing back all their savings after being laid off; the two-percent cash incentive being disbursed since July last year encouraging them to send money through formal channels, especially with the hundi system being stalled; and some Bangladeshi expats in North America and Europe deciding to keep their money in Bangladeshi banks that offer some interest on their deposits as opposed to the almost zero interest in the host countries. But out of the one crore Bangladeshis living in about 160 countries, most are low-paid migrant workers in the Middle East and Southeast Asian countries, who contribute a bulk of foreign currency in the state coffers. If we want to maintain the upward trend in remittances, we must take strategic steps to encourage the inflows. Sending money through formal channels have to be made more attractive through continued cash incentives and by making the process of sending money fast, simple and smooth. Previously, 49 percent of the total remittance was sent using the non-banking channels. Agrani Bank’s recent launch of an app-based system in Singapore to reach Bangladeshi remitters is an example of how banks can make sending money home easier. Of course, all this assumes that most of the migrants who have come back will get their jobs back in foreign lands. The Bangladesh government must, therefore, do its part in facilitating their return through negotiations with the host countries and ensuring that plane tickets are available for those who need to go back to their jobs within a certain period of time.
It is ironic that this uplifting news comes at a time when we also learn of returnee migrants being incarcerated in jail because they have apparently “tarnished the image of the country”. This has been because of their undocumented status as a result of them being duped by unscrupulous recruiters and employers. Instead of helping these migrants, many of whom have contributed to the economy through their hard-earned remittances, we have ended up adding to their trauma by treating them like criminals. Thus while we enjoy the fruits of the high flow of remittances, we must also acknowledge the contributions of these workers by treating them with respect, empathy and fairness

Share
Previous How To Pay E Challan Online and Check Status – Traffic Challan Pay India
Next How will the global economic downturn affect the Bangladesh economy ?