How secure is the VidMate app ? Should I use the Vidmate app ?

How secure is the VidMate app ? 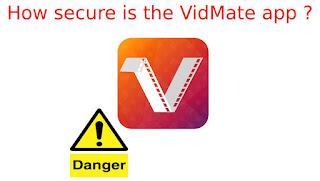 The security of the Vidmate app has been questioned since it was dropped from the Play Store. In 2019, an article in BuzzFeed News mentioned multiple security issues with the app. Mention a research in the article where some suspicious activity of Vidmate app is caught. According to the research, the Vidmate app was loading hidden ads for users. It was also unknowingly subscribing to various paid services, and was wasting users’ mobile data. You can download YouTube videos as well as Android apps and games from the Vidmate app. However, Google always advises Android users to install apps or games only from the Play Store.

Should you use the Vidmate app ?

Putting aside the things mentioned in the Vidmate app, you may like the features of the app. But whether or not you should use the Vidmate app is entirely up to you.
Downloading videos from YouTube or other sites is illegal in many cases. Google does not support YouTube video downloads using third party tools. So downloading YouTube videos using Weedmate is not legal in the eyes of Google.

There may be a duplicate version of the VidMate app

If you type vidmate and do a Google search, you will find links to download many vidmate apps. Many people do not understand which of these is real and which is fake. But if this app was in the Play Store then finding the original Widmet app would not be a problem. Now unscrupulous people can spread malicious apps or viruses under the name of VidMate which if downloaded can cause problems in your phone and your important information can be stolen.

What can be done with Vidmet app ?

Share
Previous How to protect Your Google Account ?
Next Quickly Delete These Harmful Apps From Android Phone

How to work Truecaller Android Apps

How to update my Android phone ? Check & update your Android version !

Today I am suggest a app for video editing. Some effects I like very much. …

thanks for sharing it bro…