How will the global economic downturn affect the Bangladesh economy ?

How will the global economic downturn affect the Bangladesh economy ?

The Covid-19 pandemic has caused unprecedented economic loss, which was more severe in the first half of 2020 than was earlier anticipated. The International Monetary Fund (IMF) World Economic Outlook Update (June 2020) has projected negative global growth of a higher magnitude (-4.9 percent) in 2020. This is due to several factors. First, there has been a major downturn in GDP growth, particularly in the second quarter of 2020, especially in the advanced economies (-8 percent), the oil-exporting countries such as Saudi Arabia (-6.8 percent), and the Middle East (-4.7 percent). China will grow at 1 percent only, while India’s growth will contract by 4.5 percent. In 2021, positive global growth is projected, but it will still be below the 2019 level.

Consumption and services have also declined sharply due to declines in output (20-25 percent), with consumer expenditure declining by around one-third, according to the Organisation for Economic Co-operation and Development (OECD) in June 2020. On top of this, the pandemic has caused huge unemployment—around 305 million full-time jobs across the world—with the youth and women being more disproportionately affected.

According to the World Trade Organisation (WTO), global trade will experience considerable negative growth (-13 percent) due to the pandemic, which will contribute to the projected negative global growth as well. 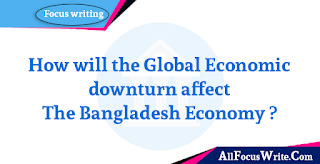 How will this impact Bangladesh? Bangladesh’s GDP growth, which has averaged around 8 percent during the past few years, has been disrupted by the outbreak of Covid-19. The incidence of poverty has also increased, and over two million people could be added to the ranks of the poor in 2020. The reported number of unemployed people now ranges from 10 million to 15 million, compared to 2.7 million in 2017.

Economic growth in Bangladesh, until the beginning of the pandemic, has been helped largely by four major drivers of growth—export earnings, especially from the ready-made garments (RMG) industry, remittances sent by migrant workers, growth in the agricultural sector, and expansion in cottage, micro, small and medium enterprises (CMSMEs). The first two are largely affected by external factors, although domestic factors can also play their part. The RMG sector is the biggest source of foreign currency earnings for Bangladesh. Manufacture and export of RMG accounts for 13 percent of the GDP, and employs around four million people. Together with the knitwear sector, it contributed over 84 percent of total export earnings during the last financial year. Due to the global recession, growing trade tensions between the US and China and decline in oil prices, overall exports, including that of RMG products, have been declining. Total export earnings and export earnings from the RMG sector amounted to USD 30.18 billion and USD 25.71 billion respectively during July 2019 to May 2020, which is 18 percent and 19 percent lower, respectively, compared to the same period during last financial year. The industry has been facing a severe crisis, with mass cancellations of orders (around USD 3 billion), a virtual freeze on new business, delayed shipments, and heavy reliance on import of fibres and other raw materials from China. As a result, about one-quarter of the total number of factories are struggling to cope or survive, leading to huge unemployment (around two million), a projected decline in exports from March to May 2020 of around USD 5 billion and unsettled liability of about USD 2 billion. In the face of these challenges, the government has undertaken several measures to protect the sector. However, it is quite unlikely that the sector will be able to produce at its pre-pandemic levels in the next six months or so. More critically, even if it does, will it be able to export at or near the pre-pandemic level to the major countries of export— USA, UK, the European Union, India, Japan, Canada, Australia and China—which are all hard hit by the global economic downturn and are experiencing huge unemployment and the resultant decline in consumption? Under such unfavourable conditions, it would not be reasonable to expect that our exports will rebound to its pre-pandemic level or even close to it in the next six months or so. Around 12 million Bangladeshis work abroad, including around 800,000 women. Annually, around 0.5 million seek jobs outside. Over time, there has been considerable increase in the amount of annual remittance. The remittance, the second biggest source of income for Bangladesh, has helped the economy by boosting foreign exchange reserves. It has helped to reduce poverty at the national, household and individual levels as well. Bangladesh received USD 18.20 billion remittances in the fiscal year (FY) of 2019-20, compared to USD 16.42 billion in FY 2018-19. However, due to the outbreak of the pandemic in major destinations for Bangladeshi migrant workers (Middle Eastern countries, USA, UK, Malaysia and Singapore) and the drastic fall in global crude oil prices affecting the Middle East countries, growth in remittances will quite likely slow down. The pandemic is pushing our migrant workers into unimaginable vulnerabilities. Tens of thousands of workers have already been sent back to Bangladesh. To deal with the problem of the returnee migrants, the government has undertaken several measures to protect them. The greatest challenge would be for countries, where Bangladeshi migrant workers were in employment before the pandemic, to revive their economies to the pre-pandemic level. It is highly unlikely that, given reduced economic activity, the price of crude oil will rebound to its pre-pandemic level in the foreseeable future. It is not clear how long it would take for such economies to rebound to their usual economic activities and create demand for migrant workers. Thus, until such time, the migrant workers will have to wait to get jobs overseas. Given the adverse affects of the global economic downturn on our export earnings and inward remittances, our foreign currency earnings are highly likely to be reduced, which will make it difficult for Bangladesh to achieve its desired level of economic growth. Barkat-e-Khuda, PhD is former Professor and Chairman, Department of Economics, University of Dhaka and Dr Muzzafar Ahmed Chair Professor, Bangladesh Institute of Bank Management (BIBM), Dhaka.