Focus Writing is About Major Factors Contributing To Economic Growth

Introduction :
.
Bangladesh has come a long way in its economic growth. From a meagre US$ 5.70 billion in 1972, the gross domestic product (GDP) increased to US$ 285.82 billion in 2018. The Bangladesh economy is the 42nd largest in the world in nominal terms and 31st largest in terms of Purchasing Power Parity (PPP). Recently, Bangladesh graduated from least developed country (LDC) status to a lower middle income country, and hopes to become a developed country by 2041. 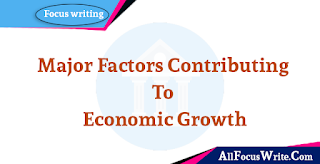 Considerable increase in per capita income has been made possible by sustained economic growth. The three broad economic sectors (agriculture, industry and services) contributed to the process of economic growth. Between 2009-10 and 2016-18, the growth rate of the agriculture sector declined while it increased in the services and industry sectors. The overall share of the agriculture (including fisheries) sector to GDP declined to around 14 per cent, while that of the services and the industry sectors increased to around 52 per cent and 34 per cent respectively in FY 2016-17. Within the industry sector, growth in the manufacturing (led predominantly by the ready-made garments (RMG) sector), ‘electricity, gas and water supply’ and the construction sub-sectors experienced positive growth. Within the manufacturing sector increase, large industries experienced positive growth, while it remained largely unchanged in the case of small-scale industries. Within the services sector, growth in trade, hotels and restaurants and transport, storage and communication remained unchanged; and real estate declined. Financial intermediations registered positive growth, though at a low rate.
Economic growth in Bangladesh has been helped largely by export earnings from the ready-made garments (RMG) sector; remittances sent by migrant workers; growth in the agricultural sector; expansion in Medium, Small and Micro Enterprises (MSMEs); decline in the rate of population growth; and the government’s safety net programmes.

First, considerable expansion has taken place in the RMG sector since the late 1970s. Today, it is the most important industry in the country; and Bangladesh is the second largest apparel exporter of western brands, after China. The RMG sector accounts for around 82 per cent of total exports. Bangladesh’s garment exports increased from US$ 6.8 billion in 2005 to over US$30 billion (The Financial Express, July 05, 2018).
.
.
.
Second, being a labour surplus country, annually about 0.5 million Bangladeshis migrate abroad in search of jobs. According to the Bureau of Manpower Employment and Training (BMET), the total number of Bangladeshi labour migrants was around 11.5 million in 2017. The figure represents about 4.5 per cent of the country’s population and 11 per cent of its labour force (BMET 2018). With increase in the number of migrant workers, there has been considerable increase in the amount of annual remittance.
.
.
Third, agriculture sector witnessed remarkable progress, despite continued loss of arable land. There has been a sharp increase in food grain production during the last over four decades. The increase has been made possible as a result of a liberalised input market and expansion of irrigation, encouraging farmers to adopt the new seed-fertiliser technology.
.
.
Fourth, small and medium enterprises (SMEs) has played a vital role in promoting economic growth, poverty reduction, and employment generation. The Government of Bangladesh highlighted the importance of SMEs in its Industrial Policy; and it has been identified as a ‘thrust sector’ by the Ministry of Finance. However, to efficiently run SMEs, allocation of adequate funds and skill development of both entrepreneurs and workers are critically needed.

Introduction to LIBOR, uses and reason for its abandonment:  LIBOR stands for London Inter-bank Offered …

How Bangladesh can avoid the : Dutch disease

Recently, Bangladesh formally proposed the signing of a Free Trade Agreement (FTA) with the Eurasian …

Technology and innovation have touched every area of our lives. Education is not exempt from …

Ensure Democracy and Good Governance in all Sectors

We have already celebrated 50 years of independence. The overall development of the country has …

We have to Build a Corruption Free Golden Bangladesh

Corruption is another name for social degradation. Just as a developed country needs a corruption-free …

Trade is commonly referred to as selling and buying of goods and services, at home …