Two facts drew our attention in the context of our overall national economic development—the first one is that our growth rate is now well over 7 percent and is one of the highest in the world at present. The second one is that Bangladesh has fulfilled all the conditions to come out of LDC status. And these developments are happening even without the contribution of the so called mega projects. Mega project has been a much hyped phrase for the last few years. This is so because the people of Bangladesh are seeing the present government undertaking different development projects that cost large amounts of money. A few examples of such projects are The Padma Multipurpose Bridge (Tk 30,000 cr.), Rooppur Nuclear Power Plant (Tk 101,000 cr.), Karnaphuli Tunnel (Tk 5600 cr.), Matarbari Power Plant (Tk 50,000 cr.), Rampal Power Station (Tk 16,000 cr.), Payra Power Plant (Tk 16,000 cr.), Dhaka Metro Rail Project (Tk 22,000 cr.), Payra Deep Sea Port (Tk 160,000 cr.) etc. Another notable project is the Bangabandhu Satellite-1 (Tk 2000 cr.). It may be observed that most of the projects mentioned above fall into either the development of the energy sector or the transportation sector. Of these, only the Padma Bridge is being fully funded by the Bangladesh Government. For all of the remaining projects, the government is relying mostly on foreign aid or loan. Japan, Russia, China and India are the primary sources of funds for the projects. Here, I would like to briefly discuss a few issues, not as a technical person but as a general citizen. 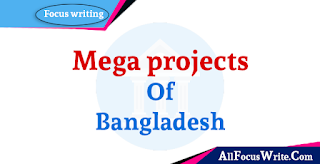 While the present government has been bold to undertake these mega projects, the way these are being implemented and its future consequences need further thinking. In a democratic environment, people’s opinion and participation in the development activities is essential right from the beginning. Conducting a public hearing before undertaking a project is practiced in developed countries to get a first-hand idea of the public feeling about a project. The foundation for a successful project starts much before the project commences. Such public meetings bring diverse groups of stakeholders together for a specific purpose. Public meetings are established ways for people to come together to express their opinions, hear a public speaker or proposed plan, engage in shared learning about a topic, or work together to develop solutions. Such meetings help develop a kind of ownership among the people and reduce the gap between the masses and the government and bring the leadership closer to the people. However, it is unfortunate to see that no such public hearing has been conducted for the mega projects mentioned above.
In most cases, the necessity of these mega projects for the future development of Bangladesh is undeniable. However, there may be a few cases where there would be better alternatives. A probable example of such a case is the Bangabandhu Satellite project. Satellites are good for broadcasting over a geographically large area. Launching a satellite for purely broadcasting purposes may not be justified for a geographically small country like Bangladesh. And certainly we are not going to use it to spy over other countries through our military intelligence system. Satellite communication is costlier than the alternatives which we are currently using. Our telecommunication requirements are more than adequately served by the submarine cable networks and the countrywide fibre-optic cable networks. We are even selling bandwidth to other neighbouring countries too. And there are plenty of commercial satellites around us leasing out transponders to serve our broadcasting needs at a much cheaper rate. Under such circumstances the justification of launching the satellite is hardly meaningful except for the purpose of national pride.