Misuse of technology – Ways to solve the problem 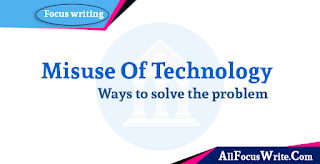 Significant advances in information and communication technology have been made today due to the unimaginable advances in science. As a result, many changes in the meaning of life are being observed. Just as people are climbing to the golden peak of development as a result of proper use of information technology, they are pushing themselves towards destruction due to misuse of information technology. Analyzing the overall picture of modern urban society, we see that the environment in which children and adolescents are brought up does not have adequate playgrounds, lack of playgrounds in schools, lack of recreation, limited space to roam, and above all the busyness of parents.
The need for sports and recreation for the physical and mental development of children and adolescents is undeniable. But we are failing to meet their needs. As a result, video games, mobile, internet, Facebook are occupying that place. These social media and various television channels are greatly influencing children and adolescents. Today, a large segment of teenage society has become obsessed with fictional video games. Video games groups are fighting. Being excited about Harjit. As a result, tolerance among them is declining. At a young age they are becoming violent. In many ways gangs are dominating the area. Clashes often occur between different gang parties in the same area. Many members of the gang party are involved in various criminal activities including drug use, robbery, robbery or reckless driving. This is leading to social degradation, chaos and deteriorating law and order situation.
In addition, violence, terrorism and hegemony are being given prominence in the serials of various TV channels, killing people for trivial reasons is being shown in those serials. Since children and teenagers are imitators. So it is thrilling to see them. Gradually they are becoming prone to crime. Becoming self-centered. Their ambitions are becoming inconsistent with reality. Ethics seems to be outdated. They are becoming accustomed to reckless living to increase their wealth. Confidence and love are rising in personal relationships. There is no comfort in life, family, heritage, values, etc. There are no issues, it is becoming difficult to handle the situation. So children and teenagers are getting involved in criminal activities. Our children and teenagers are forgetting their own culture by entering rock, band, remix in music. The rules and regulations of other countries have entered the ceremony. There is no management of culture. Inferior people give birth to inferior offspring and, thus, propagate their inferiority.
According to the survey, secondary level students spend most of their time communicating through Facebook, Skype, Twitter, Flickr, MySpos, Diaspora, Orkut etc. These can be used to send messages, exchange personal information, photos and videos. While logged in, you can chat with each other, view profiles, send messages and pictures, write comments on pictures and add pictures. Millions of people around the world are enjoying this opportunity of Facebook every day. But for lack of proper direction, our children and teenagers are abusing it. Thus social media is playing a silent role in social degradation.

The misuse of technology is also affecting the physical and mental condition of children and adolescents. Children who spend more time with smartphones and tabs sleep less than others. The researchers say that these devices emit a kind of blue light, which impairs the ability of people to sleep. Prolonged playing games has a negative effect on the eyes. Radiation from these technologies causes hearing loss and can lead to major problems, such as brain tumors. A group of researchers in the United Kingdom have claimed that its users may be affected by diabetes as a result of technology addiction. Ways of overcoming: In order to overcome the above situation, the government as well as the educated and conscious people have to come forward with appropriate steps and take effective measures. For example, the best shelter for children and adolescents is the family. So family members need to play a significant role in properly controlling the behavior of children. In this case, parents have to play a role like Bill Gates. According to the newspaper, Microsoft founder Bill Gates did not allow his children to use their mobile phones until they were 14 years old. Similarly, Apple founder Steve Jobs did not allow his children to use the iPad. Our parents caressed our children and handed them expensive mobile phones. We need to learn from the behavior of those who are known around the world for relying on technology. Sports and recreation should be arranged for children and adolescents in the field. As an alternative, you have to arrange Keram board, ludu, chess, drawing etc. in the house. Parents need to give time to their children. Eating and going out with all the family members on holidays. Discuss with children about the negative aspects of information and technology. To provide adequate sports and entertainment in the institutions. Traveling to scenic and historical places with family members. Students need to be book oriented. For this the libraries of the organization have to be enriched. Build a private library at home. Excessive or unbridled rule cannot be allowed. Take care that the child does not become self-centered. A room with the door closed cannot be permanently allocated to the child. Explain the harmful aspects of technology to the child, give an idea of ​​how much should be used. What is Facebook, not stop using technology? The child needs to be taught what to use. Above all, in order to protect the generation from social degradation, it is necessary to impart moral education to the children. Speaking the truth, refraining from lying, not harming anyone, avoiding hypocrisy and deception, not disrespecting anyone, respecting the elders and loving the younger ones are considered as manifestations of morality. When animal power becomes strong in human beings, these virtues disappear at a proportional rate. In order to run a society and a state smoothly, morality must be nurtured and cultivated. There is no substitute for moral education in order to build a healthy individual and society. In today’s age of information technology and sky culture, it is much more applicable.