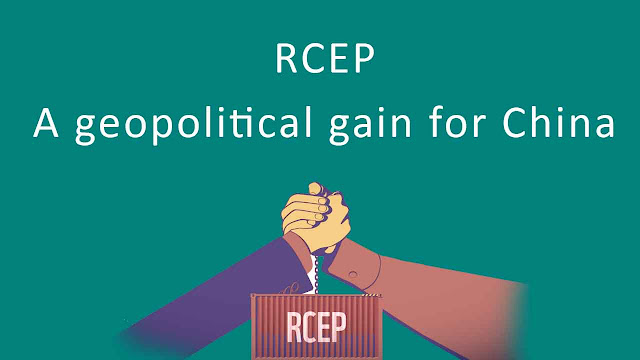 The Regional Comprehensive Economic Partnership (RCEP), negotiations for which began in 2013, took effect on January 01, 2022; with which a new political debate has started- Did this agreement actually increase China‘s power in the Asia-Pacific? In fact, according to some experts, China has created an anti-American bloc through this agreement. The Regional Comprehensive Economic Partnership (RCEP) is the world‘s biggest free-trade agreement (FTA) involving the 10 member states of the Association of Southeast Asian Nations (ASEAN) bloc – Brunei, Cambodia, Indonesia, Laos, Malaysia, Myanmar, Philippines, Singapore, Thailand, Vietnam and five of their FTA partners�Australia, China, Japan, New Zealand, and South Korea. RCEP covers 30% of the global population, 30% of the global GDP, 28% of global trade. It‘s also China‘s first multilateral trade pact, as well as the first between China, Japan, and South Korea that excludes the United States and India. The agreement focuses on lowering non-tariff obstacles to goods and service trade between member nations which includes measures for service industries and e-commerce and movement of people.The most significant component of the agreement is the uniform rule of origin. To be eligible for duty reductions, member countries must produce at least 40% of their product in one of the 15 countries. China has won a big geopolitical win with the RCEP as the deal improves Asia‘s economic connectivity closing to China‘s economic orbit as a result of tighter integration. Beijing will operate its economic muscle as the region‘s largest economy to exercise influence over the bloc‘s norms and standards, since it currently does in the countries that have signed on to its Belt and Road Initiative. ―This alliance will definitely help China in realizing its geopolitical ambitions,‖ quoted by Alexander Capri, a professor of commerce at the National University of Singapore, as saying. Former Indian Army  lieutenant general Utpal Bhattacharya said, ―This agreement is more political than economic.‖ According to Utpal Bhattacharya, there is no scope for implementation of the issues mentioned in the agreement right now. As a result, the agreement is an attempt to convey a political message. The RCEP will strengthen China‘s economic ties with East Asian countries and with US allies like Japan and South Korea. Though Beijing has territorial disputes over Spratly Islands and Senkaku Islands with South East Asian countries. Again, Australia whose relations with the PRC (People‘s republic of China) have been deteriorating since early 2020 because in response of Australia‘s demand of impartial probe into China‘s first coronavirus epidemic, China banned import of beef from Australia. China now has the ultimate dominance in South China Sea and the Asia-Pacific. In the past few years, the United States has been desperate to reduce Chinese dominance in South China Sea. Recently, Biden administration is trying to boost up the activities of QUAD, AUKUS with India, Australia and Japan to balance the Asia-Pacific region. Naturally, China did not like it. The timing of the signing of the RCEP agreement is extremely significant. The world is currently in turmoil due to the coronavirus epidemic. Sadly, the United States has failed to lead the world in overcoming the epidemic and the resulting economic crisis. In addition, one of the most powerful countries in the world went through a political crisis since Donald Trump refused to accept defeat in the US presidential election. China has tried to exploit this opportunity. Under the banner of economic and trade agreements, this huge event is aimed at proving Asia Pacific once again and so-called US allies Australia, Japan and New Zealand were also forced to come. In addition, Singapore, South Korea and Thailand will attend the opening ceremony of Beijing Olympic 2022 despite earlier withdrew from USA. Actually, these countries have signed this agreement for their own commercial  interests. In other words, China has shown that it has created a bloc to counter the bloc that the US has been trying to build in Asia Pacific for so long. The RCEP is therefore seen as a way to strengthen China‘s influence in the Asia-Pacific region. Because the United States is missing a similar trade agreement in the region. Though former United States President Barack Obama had signed the Comprehensive and Progressive Agreement for the Trans�Pacific Partnership (CPTPP), the Trump administration withdrew from the deal in January 2016. The 12 CPTPP countries are Australia, Brunei, Canada, Chile, Japan, Malaysia, Mexico, New Zealand, Peru, Singapore, Vietnam and the United States. The two agreements cover six countries – Australia, Japan, Malaysia, New Zealand, Singapore and Vietnam. So along with China‘s leadership in the region, the TPP can serve as a balance. Although India initially negotiated the agreement, it withdrew from the agreement in November 2019 on the pretext of protecting its domestic industry. This will allow China to become more influential in 14 RCEP countries by integrating its value chains. When Indian Prime Minister Narendra Modi announced his country‘s strategic re-orientation, entitled ―Act East Policy,‖ in November 2014, regional leaders believed India would become a more serious strategic role in Asia. However, India‘s withdrawal from the RCEP in late 2019 has given out a serious disappointment to the country‘s diplomatic ambitions. It shows that New Delhi is still unable to walk the talk when it comes to its regional economic agenda. India‘s withdrawal, like that of the United States, has not only disappointed major democracies such as Japan and Australia, but it has also put its protectionism on display around the world, creating an image of unreliability in the eyes of ASEAN members. Finally, it can be said that RCEP countries would maintain a cordial relationship with China which is a significant geo-political gain for China. The tide appears to be turning in China‘s favor. The recent remark of South Korea‘s ambassador to the United States, Mr. Lee  Soo-Hyuk, about US dominance in the area demonstrates this-―just because South Korea chose the US 70 years ago does not mean it has to choose the US for next 70 years too.