The government has declared 1,743sqkm of the Bay of Bengal, including St Martin’s Island in Cox’s Bazar, a marine protected area. Earlier, 590 hectares of the island had been announced an ecologically critical area. Issuing a press release yesterday, the Ministry of Environment, Forest and Climate Change said the decision was taken to help prevent uncontrolled ships and motor boats, overfishing, dumping of waste and harmful chemicals in the sea, destruction of coral colonies and depletion of the area’s biodiversity. St Martin’s Island is now the second, and by far the largest, marine protected area in the country. According to The Wildlife Conservation Protection Act-2012, under which the declaration was made, no person shall harvest, destroy or collect any natural resources or disturb or threaten any wildlife, destroy their habitat and pollute watercourse. It will even restrict people from entering the area without permission from the authorities. 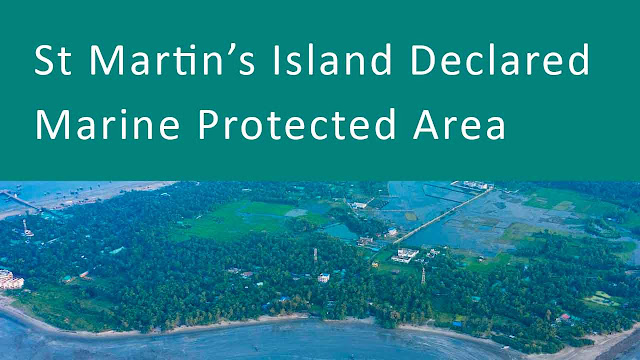 However, people will be able to enter the area with permission, perhaps by paying an entry fee, for study or investigation purposes on relevant and helpful subjects on wildlife, photography, research, and ecotourism. The declaration will help the authorities concerned enforce laws to limit extraction of marine resources from this protected area, which will ultimately increase marine fish resources and aquatic animal breeding there, said the release. Bangladesh’s first ‘marine protected area’ declared The Swatch of No Ground, a submarine canyon in the Bay of Bengal known as a hotspot for cetaceans, has been declared Bangladesh’s first “marine protected area”. The declaration on the 1,738 square kilometres area, with an average depth of 900 metres and located south of Dublar Char, was made through an environment and forest ministry circular on October 27 under the Wildlife (Conservation and Security) Act, 2012. The announcement officially restricts fishing and other offshore commercial and any form of unauthorised activities in the area, ensuring long term protection of marine life there. In a press release dated November 1, Tapan Kumar Dey, conservator of forests, Wildlife Circle, Bangladesh Forest Department, lists endangered dolphins, whales, porpoises and sharks found in the area. They include Irrawaddy, pink river, bottlenose, spinner and spotted dolphins; finless porpoise; Bryde’s, fin, humpback, sperm, dwarf sperm, killer or orca and false killer whales; and hammerhead, blue, whale, tiger and sawfish sharks. The Wildlife Conservation Society says the area has been acting as a spawning and breeding ground of many endangered oceanic species of the Bay and Indian Ocean. Popular Hollywood actor Leonardo DiCaprio has congratulated Bangladesh on the newly established marine protected area around Saint Martin’s Island. DiCaprio, whose Twitter bio reads “Actor and Environmentalist”, wrote on the platform on Friday: “Congrats to the Government of Bangladesh, local communities & NGOs on a newly established Marine Protected Area around Saint Martin’s Island that will protect an incredible community of biodiversity and provide key habitat for Bangladesh’s only coral reef.” The Oscar-winning actor is identified as one of the most active celebrities in the climate change movement, and dedicates most of his social media posts to climate-related news. This is reportedly the first time Bangladesh has appeared in one of his tweets. The Bangladesh government recently declared around 1,743 square kilometres of area of the Bay of Bengal adjacent to Saint Martin’s Island as marine protected area to conserve its rich biodiversity and ecosystem. The island is now the largest marine protected area in the country. In 1999, a total of 590 hectares of area of the island was declared as ecologically critical area. With the new measure, the government hopes to protect the coral and marine aquatic life and marine biodiversity of the island. Moreover, limiting sustainable extraction of marine resources from the protected area will result in increased marine fish resources and aquatic animal breeding, the authorities expect.