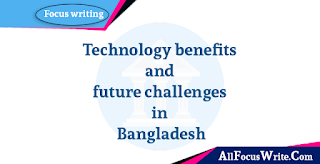 Ordinary people can receive all the necessary civic services from any part of the country at the moment. Reduced time and suffering. Employment has increased with the increase in living standards. Bikash, Rocket, Cash etc. are now becoming more popular among the common people of the country than the conventional banking system. ATM booths are becoming more convenient for withdrawing and depositing cash. From traditional banking to internet banking, freelancing in terms of professionalism, teleconferencing, e-filing, e-tracking, business to e-commerce to home-office security, the CCTV camera used for monitoring is no longer out of internet connection. The use of information and communication technology has brought about a groundbreaking revolution in every basic field of the country from education system to medicine, economy, politics, security, culture. The life of the people of the country is moving. Bringing comfort and prosperity to life. This is like a new Bangladesh that has changed with the touch of information technology.
However, in the field of information and communication technology in 2008, Bangladesh was a country without prospects on the world map.
The work plan of the ‘Digital Bangladesh’ vision of Sheikh Hasina’s government was formulated to achieve the four main goals of digital government, providing digital services to the citizens, development of information and technology based human resources and expansion of information and communication technology industry. The main goal of the ‘Digital Bangladesh’ vision was to improve the living standards of the people by using technology. With this goal in mind, the Access to Information (A2I) program was set up under the Prime Minister’s Office. Under this program, about 5,275 Union Digital Centers have been set up in the marginal areas of the country under the relentless initiative of Prime Minister Sheikh Hasina. Through this, about 200 types of free digital services are being provided to the people. So far, more than 12 crore services have been provided to the general public through these digital centers, out of which 80 million birth registration certificates have been issued and 20 lakh labor migration hopefuls have been provided information services. Bangladesh has been able to launch the world’s largest government portal with the dedicated efforts of the Prime Minister to bring information technology to the doorsteps of the people. Through this, work is being done to bring information easily by bringing two and a half thousand websites on the same platform. Due to these initiatives, Prime Minister Sheikh Hasina has received many honors and recognitions in recent times.
Under the visionary and timely leadership of the Prime Minister, Bangladesh is on the verge of setting new milestones in building a digital Bangladesh by providing broadband facilities in rural areas. In a pledge document titled ‘Bangladesh on the Progress of Prosperity’ in 2016, Prime Minister Sheikh Hasina said, “If we can win the Eleventh Parliamentary Election, the village will be the city.” As promised, the government is working to eliminate digital disparities between urban and rural areas. The work of Info Sarkar-3 project for setting up fiber optic network in 2,600 unions of the country has already been completed about 80 percent. The work of the whole project will be completed within this year. If the project is implemented, the digital disparity between urban and rural areas will be eliminated. As a result of ensuring broadband service in rural areas, it will be possible to bring schools, colleges and other educational institutions at the grassroots level under high speed internet service. Apart from this, free high speed internet service can be extended to the common people through WiFi technology at the village level. It will be possible to build a digital system in administrative activities at the union level. Above all, it will pave the way for bringing grassroots people under more digital services. Denmark recently announced 100 million euros in assistance to bring Internet services to remote and inaccessible areas of the country. Denmark will provide funding for the proposed ‘Digitization of Islands along the Bay of Bengal and Haor Area Project’. The project will connect remote areas through the use of submarine fiber optics. Fiber optical connectivity in coastal haors and northeastern islands of the country will contribute significantly to rural socio-economic development through high speed internet and e-services. According to a World Bank research report, every 10 percent broadband Internet penetration leads to 1.36 percent GDP growth. And for every 1000 broadband connections, about 10 unemployed people are employed.

With the entry of digital age, the number of internet users in Bangladesh has increased tremendously in the last one decade. In 2008, the number of internet users in Bangladesh was only 1.5 million. At present the number of internet users is 95 million, this number is increasing. Bangladesh is currently the fifth largest Asian country in terms of internet usage. According to Internet World Status, by December 2016, more than 60 million people in Bangladesh have access to the Internet. In 2000 this number was only one lakh. Bangladesh is in a very good position in the 2018 integrated internet index. Bangladesh ranks 72nd out of 6 countries in the index. Bangladesh is followed by Venezuela, Maldives, Myanmar, Algeria, Tanzania, Pakistan, Senegal, Nepal and Cambodia. Sweden tops the list. Neighboring India ranks 47th in the list. Sri Lanka is at number 52. Earlier, in a report titled The Inclusive Internet Index: Bridging Digital Divides by Facebook.org, Bangladesh was ranked 47th out of 65 countries. Bangladesh has joined the second submarine cable SEA-ME-WE5 in 2016 to ensure uninterrupted internet connection and service for the people. At a cost of ৭ 84.8 million, a 25,000 km long cable line has been laid from Singapore to Bangladesh. If the first submarine cable connection is accidentally disconnected, then the second submarine cable is connected to ensure that Bangladesh is not disconnected from the uninterrupted internet connection. Bangladesh is enjoying Forge service due to the second submarine cable connection. At present, 99% of the people of Bangladesh and 95% of the region are covered by mobile telecommunication networks and services. At the beginning of the implementation of Digital Bangladesh, the number of mobile phone users was only 20 million. Today more than 12 crore people are using phones and the number is increasing day by day. Sheikh Hasina’s government has introduced Forge (Fourth Generation) technology to ensure state-of-the-art technology for the common man. Since the launch of Forge service, a total of 1 crore 16 lakh mobile users in the country have availed this service. From next year, the government will start licensing mobile operators for fifth generation wireless services (5G). 5G is the most advanced technology wireless network. 5G will be completed at least 10 to 100 times faster than 4G. Online analysts say that by 2020, all types of economic transactions in the world will be under the control of the Internet. Under the leadership of Sheikh Hasina, Bangladesh is keeping pace with the modern developed world. The government has declared the ICT sector as an important sector. At present, about 1.3 million information and communication technology professionals and 10,000 information and communication technology entrepreneurs have become self-reliant and have earned about 300 million. In 2006, the revenue of the ICT sector in Bangladesh was 26 million, which has increased to 600 million today. If the current pace of growth continues, the country will earn huge amount of money in the ICT sector by 2020. According to the World Economic Forum, Bangladesh ranks 2nd in the world in outsourcing. According to the company, 16 percent of global freelancer workers are from Bangladesh. To take the outsourcing sector a step further, the government is planning to provide high speed internet services for freelancers. The government is organizing international BPO conferences every year to increase the enthusiasm in this sector. In addition, the government is planning to set up 500 Business Process Outsourcing (BPO) centers. To ensure world-class information and technology infrastructure, facilities and services in Bangladesh, the government is gradually planning to build high-tech parks, IT parks and software technology parks in every district. Bangladesh’s first high-tech park is being built on 355 acres of land at Kaliakair in Gazipur. When the construction work of this high-tech park is completed, 1 million jobs will be created in the IT sector. This will reduce unemployment in the country. Bangabandhu Sheikh Mujibur Rahman, the great architect of independence, built a new identity of Bangladesh with boundless self-confidence and dream. With the help of his worthy daughter Desaratna Sheikh Hasina, Bangladesh will rise to the top of the world as a country advanced in modern science and information technology, that day is not far away.