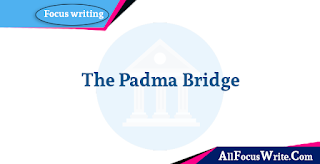 The Padma Bridge is a multipurpose road-rail bridge across the Padma river. The bridge which is under construction is approximately 6.15 km long and 18.10 m wide. When the bridge will be completed, it will be the largest bridge in Bangladesh. The cost of the construction is the TK 30,193 crore and it is funded by the government itself. The bridge will directly connect capital Dhaka to 21 southern districts through road and railway after the completion of the construction work. As the lack of connectivity has left the south-western region as one of the least developed parts of the country, the people are living below the poverty line. As there will be better connectivity after the completion of the construction work between both sides of the bridge, the bridge will not only benefit the southern region but there will also economic benefit all over the country. The certain benefits we will get from the bridge include: some studies have predicted that Studies have predicted that the national GDP growth rate will increase by 1.2 percent. That the poverty rate will decrease by 1.9 annually is also predicted by some sources. The poor people will be able to come out from their poverty and can lead their lives comfortably. The farmers of these districts can take their crops to Dhaka with short possible time through this better communication network. The bridge will also attack local investors and foreign investors to invest more and more. As there will be investment and industrialization, more than 20 million unemployed are expected to be employed. The govt will earn hundred of crores of Tk from tourism. So it is clear that the bridge is going to being an enormous benefit in farming, trade, poverty reduction, tourism, export- import and so on. As there will be industrialization and communication development on the both sides of the bridge, the bridge will help the country economically and socially. The 41st span, the last one placed on the pillar, has made the bridge fully visible.The project has gone through the obstacles economically and technically but now the construction is going in full swing. The construction of the bridge will be competed by December, 2021 though the inauguration of the construction was in 2015 . And it will be open for transports by the mid 2022 if everything goes fine. With this the long cherished dream of Sheikh Mujibur Rahman especially the dream of the people of Bangladesh will be fulfilled.