The role of agriculture and rural economy in Covid 19

The role of agriculture and rural economy in Covid 19 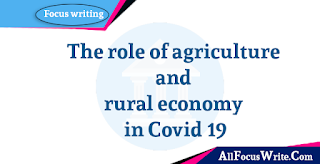 Agriculture is the main driving force of Bangladesh’s economy. Agriculture plays an important role in increasing productivity and income and creating employment in rural areas for the prosperity of a large population. Agriculture contributes 13.40% to the country’s GDP and 40.7% of the country’s manpower is engaged in agriculture (Economic Survey-2019). The world may have been predicted by various world news agencies. And even in this difficult disaster, this agricultural sector has kept the economy of Bangladesh alive. Basically, the national economy of Bangladesh is based on agriculture, readymade garments and foreign exchange or remittances of migrant workers. The last two are not permanent systems but agriculture is permanent. They survive despite adversity, protecting the nation from hunger and malnutrition.
Due to the corona, industries, factories, transport, educational institutions were all closed, but the agricultural and farmer production activities did not stop. There is some excitement in the minds of the farmers as they have been able to successfully harvest the boro paddy of Haor and have got good prices so far. We have produced. As a result, our total national income has risen to বিল 35 billion.
According to the Department of Agriculture, boro paddy was planted on 48.54 hectares of land during the Corona period and against the target of 2,94,36,000 metric tons, about 30 million metric tons were planted. Metric tons of boiled rice, 1.5 lakh metric tons of Ataap rice has been collected and stored. As a result of government cooperation and increased productivity, Bangladesh is in the 3rd position in rice production, surpassing Indonesia. There were fears about watermelon, but with the intervention of the government, the introduction of emergency transport system has been successful. The people of the country are getting all the fruits of the honeymoon even in this transitional period. The hard working hands are still active. Even after 80%, this sector has sustained the country’s economy.
As a result of the corona virus, about 20 million people who lost their jobs due to closure of mills have left the city and returned to their villages. Some have returned to their villages to cultivate crops on their uncultivated land. Done.
Meanwhile, the proposed budget of Rs 29,973 crore (3.6% of the total allocation) has been allocated to address the impact of corona. The government has included various incentives in the budget with various incentives to bring momentum in the agriculture sector. The budget has announced 50% tax rebate on purchase of modern machinery, 20% tax on export of agricultural products and 20% tax exemption on electricity in agriculture sector. Our agriculture, which is a major driving force of our economy. The government has already planned to insure agriculture. The government has taken a medium term (2020-2023) plan to increase food production. This initiative is to ensure livelihood of farmers, agricultural workers and concerned people including crop production of the country. Because when it comes to rural development and rural development, the development of agriculture and agro-based industries, trade and service sector comes from the beginning. We can take a groundbreaking step by starting the cultivation of cash crops in three to four lakh hectares of arable land in our riverine areas especially Padma, Meghna and Jamuna.


The impact of corona outbreak in agriculture is very limited. We hope that this package will accelerate agriculture by preventing the impact of corona on agriculture. Nevertheless, the following measures can be taken to prevent the outbreak of Corona on the basic economy and the agricultural sector in the country. 1) To distribute the list of suitable persons for the purpose of the incentive package announced by the government in the field of agriculture among the suitable persons. 2) I think it is necessary to increase the incentive in the agricultural sector from five thousand crore (4% interest). Strengthening the agricultural sector should not be the main task of the economy. 3) If it is possible to finance the current capital based sectors in agriculture such as horticulture, fisheries, poultry, dairy and livestock on an urgent basis, it is expected that it will be possible to overcome the losses in the agricultural sector. 4) Incentives are also needed in the grain and crop sector at the moment. Grain and crop production needs to be maintained and production needs to be accelerated. Because no one can say for sure how long this situation will last and we need to think a little more about whether the outbreak can happen again after the current situation becomes normal. 5) According to the circular of Bangladesh Bank, the public-private bank is not obliged to give this loan but the responsibility of collecting the loan is entrusted to that bank. So how interested would private banks be in providing such loans! In this case, it would have been better if Bangladesh Bank had mentioned in the circular that it is compulsory to give loan. 6) I think our peasant brothers are soldiers in this Corona War. In the case of personal, family, socially, farmer brothers are involved in corona coping and raising awareness, agricultural extension workers and farmer leaders must come forward. 6) The Agriculture Extension Office should pay special attention to ensure that there is no problem in obtaining necessary agricultural inputs, seeds, fertilizers, pesticides, irrigation management and other agricultural equipments. 9) Necessary steps should be taken to ensure fair price of other crops including paddy, wheat, maize, potato, pulses, oilseeds, garlic, onion, chilli, molasses and jute produced by the farmers. 10) Special attention should be given to the incentives of the revenue sector and the implementation of the agricultural development projects under implementation at the field level. 11) Transportation, warehousing, storage and marketing of agricultural products should be arranged without any hindrance. 12. Instructions announced by Hon’ble Prime Minister- Crops should be produced in every inch of cultivable land. The Department of Agriculture has to be very sincere in implementing this directive at the field level. In conclusion, it is possible to keep the economy normal by relying on agriculture in an agricultural country. And, if the above issues continue to be observed, the agro-based economy will be able to turn around again, the Bangladesh of Bangabandhu’s agricultural economy will turn around.