The role of Banks / Central Banks in dealing with Covid – 19 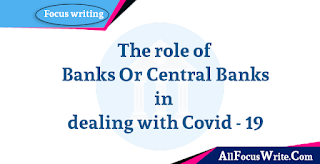 The need for the banking sector to restructure the fragile economic system of the country in any major crisis is immense. At a time when the global epidemic caused by the coronavirus has devastated the economy of Bangladesh, the participation of the banking sector has become vital as a catalyst for overcoming the crisis, to revive the stagnant economic activities and to transfer liquidity among the income-losing people.

According to the World Health Organization, millions of people in Bangladesh will be affected by corona. Although the death toll in Bangladesh is still low. But the death rate is much higher than in other countries.

Any epidemic has two stages, the first is a health disaster and the second is an economic disaster. All the countries of the world are trying to keep the economy afloat by giving priority to health at the moment but the shock of the economic catastrophe is waiting in the days ahead.

The global recession of 2008-09 was due to collusion between banks and real estate companies. Utilizing the loopholes in the central bank’s policy, the big banks in America and Europe gave loans in real estate without checking or selecting at that time. Similarly, other multinational companies have also given huge amounts of bonuses, commissions and pay checks to their managers, which has created an artificial liquidity crisis all over the world. Bangladesh’s economy was fairly secure when countries around the world were booming. Our Bangladesh Bank has played a role as a bulwark against this. One of the monetary policies of Bangladesh Bank was to keep the liquidity supply in order and to keep the economic activities going by reducing the interest rates.

Hon’ble Prime Minister of the Government of Bangladesh Sheikh Hasina has already announced an incentive of around Tk 1 lakh crore. The government has fixed the interest rate on banks at 9 percent from April this year; As a result, banks will lose a lot of money.

According to the Bangladesh Bank, Tk 9,69,062 crore has been disbursed in the banking sector till last September, which is 11.99 percent of the total disbursed loans. Three months ago (at the end of last June) the total amount of defaulted loans was 1 lakh 12 thousand 425 crore. As a result, defaulted loans have increased by Tk 3,063 crore in three months. Meanwhile, the capital deficit of 13 banks has decreased.

With this in mind, on April 30, ADB approved a 100 million loan to Bangladesh. Following the new approval of this 500 million, the company has now approved a total loan of more than 602 million. In addition, the World Bank is lending 100 million to Bangladesh to address the crisis caused by the (corona virus)

Despite this situation, other banks, including the central bank, need to review the situation and take action.
✓ 1. To know the customer, to know his business, to calculate the loss of the business in the current context, to determine the amount of money he will need in this emergency, to collect CIB, to see the credit report, to evaluate the land / security, etc.
✓ 2. Bangladesh Bank has reduced its CRR from 5.5 per cent to 5 per cent and repo rate by 25 per cent. This trend must continue.
✓ 3. In addition, the government has announced incentives or easy loans for agriculture and small and medium enterprises, the implementation of which the central bank has to play a role.
✓ 4. If the flow of export earnings and remittances continues to decline in the next few months, then Bangladesh Bank will have to consider the issue of bonds.
✓ 5. If the crisis does not abate, the last step will be to keep the country’s money supply afloat by imposing currency on the central bank
✓ 6. Banks need to reduce cash dependence by increasing online reliance to reduce the spread of the Corona epidemic.

I think the banks will play an effective role in considering the above issues.
Because of Corona, the question of human life on the one hand and the risk of economic catastrophe on the other. Every country suffers from this condition and the central bank must take a firm stand in resolving the current economic crisis. Proper economic coordination, not control of the financial system, will be the main focus of this challenge. The way Bangladesh Bank has dealt with the situation in 2008-09, there is no question about the capacity of this institution. But with the right leadership, bridging the gap with individuals and business groups, including the government, the bank’s economic future for at least the next two years will depend on how it addresses the challenges of the next few months.

Share
Previous Covid – 19 FOCUS WRITING │Coronavirus: Prevention is better than cure
Next Banking and Financial Technology Use during Covid – 19