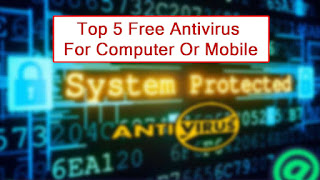 Updating Windows Defender regularly will keep your computer safe from most viruses or malicious software. You can also use another third party antivirus software for added security. Before that, let us know what are the features of antivirus.

Let’s take a look at the top 5 free antivirus software of today, from which you can choose any one.
Avast Free Antivirus

Avast is a very well known name in the world of antivirus. It has been introduced as the best antivirus software in various testing labs. CyberCapture is one of the main features of Avast Antivirus, which scans a new file before running it on the PC. Avast Free Antivirus also has many more features including Network Security Inspector, Password Manager. In addition, Avast Antivirus provides URL protection in all browsers. However, the privacy settings of Avast may seem a bit difficult to you, and the links to its paid components may not look good.

Many websites have named Kaspersky Free Antivirus as the best free antivirus. But we put it in third place, considering both the pros and cons. Kaspersky Antivirus provides free full-scale malware protection. There are also many benefits including real-time scanning, anti-phishing, email scanning, spyware protection. It may seem like a very basic level antivirus to you, but it is enough for personal use. Its user interface is very simple and its ability to catch viruses is remarkable.

Avira is a well-known name in the world of antivirus software. It can detect and block any type of malware from the computer. Other Avira product install benefits can also be found in the software. The scanning engine of Avira Antivirus is relatively slow. It also provides added security to Chrome and Firefox browsers. However, its excessive popup can annoy you.

Properly used antivirus or antimalware software can keep your computer safe from various viruses, malware and ransomware. Before installing any software on the computer, you must be sure about its source and manufacturer.

Share
Previous Does Windows 11 run on your PC ? Learn More . .
Next The best things about iPhone 13丨Apple’s latest models

Although Windows 10 was supposed to be the last version of the Windows operating system, …