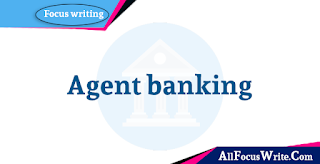 Agent banking is the provision of limited range of banking and financial services to the underprivileged people by employing agents under valid agency contracts instead of tailors or cashiers. The owner of the outlet completes the banking transaction on behalf of a bank. It is regulated as per the recent guidelines of Bangladesh Bank.

Current Status of Agent Banking in Bangladesh:
On January 17, 2014, Bank Asia officially launched the first agent banking in the country. At present, 22 banks across the country are providing agent banking services with 6,260 agent establishments and 11,065 outlets. According to Bangladesh Bank, at the end of March this year, the number of agent banking customers stood at 7.5 million, of which 45 percent were women.

Even in this Corona period, where the branch banks were defeated one after another, various branches of the state-owned banks of the country were closed, the amount of opening accounts, deposits and loans has increased with the increase in expatriate income under agent banking! In March 2020, the expatriate income under this bank service came to Tk 19,535 crore.

Private sector bank Asia has played a major role in the spread of agent banking services in Bangladesh, so far they have opened the most number of 24 lakh 57 thousand 185 accounts, followed by Dutch-Bangla Bank, the first mobile banking service in the country. Leading public sector banks have opened 1 lakh 61 thousand 37 accounts in the fifth position.