Blue-economy has opened up new horizons for the country’s economy to take advantage of the vast body of water at sea and the vast resources at its bottom.
Blue-economy is a sea resource dependent economy. In 1994, Professor Gunter Pauli proposed the concept of blue-economy as a sustainable and environmentally friendly model for outlining the future economy. 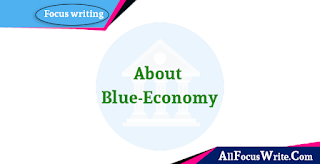 Three parts of the earth is water. The countries of the world are looking to the resources stored in the sea to meet their current and future needs.
By 2050, the world’s population will be about 900 million. To feed this huge population, we have to depend on the sea.
Image of Global Blow-Economy:
The maritime economy continues to contribute to the world economy in many ways. 3 to 5 trillion US dollars worth of activities are taking place around the sea every year. . Marine fish, plants and animals provide 15 percent of the protein to the world’s 4.3 billion people. . Thirty percent of the world’s gas and fuel oil is supplied from various gas and oil fields under the sea. . It is also possible to develop a sea-based pharmaceutical industry by increasing knowledge of marine biodiversity.
The Blue Economy is becoming increasingly popular around the world. The Blue Economy has been at the center of discussions at all international conferences over the years. The conferences that have discussed blue-economy are:
– Rio + 20 Conference in 2012,
– Asian Conference on Maritime Affairs,
– Food security held in Bali in 2013 and
– Blue Growth etc. The name of the conference is especially significant.
The Blue Economy is at the heart of the development strategy of the international organizations
– Organization for Economic Co-operation and Development (OECD),
– United Nations Environment Program (UNEP),
– World Bank,
– Food and Agriculture Organization (FAO),
– European Union (EU) etc.
Various as well as international organizations
In addition to international organizations, various small and large countries are formulating Blue Economy based development strategies.
Countries whose economies depend on the sea
Indonesia:
The lion’s share of Indonesia’s national economy depends on the sea. In recent times, the country has taken steps that, if fully implemented, would increase the value of resources extracted from the sea to ten times the national budget.
Australia
Australia currently earns about বিল 44 billion from maritime resources.